BAM Nuttal were appointed as principal contractor for the construction of the Campbeltown New Quay Extension located at Campbeltown, Ayer, Scotland. The new facility was required for the storage, assembly and loading of wind turbines for an offshore wind farm and for exporting.

The works included the construction of 200m of new quay wall with deep water berthing facilities, to a depth of -7.8m CD. Foyle & Marine Dredging Ltd were appointed as the dredging contractor for the project.

The dredging operation was carried out with the spud leg dredger Aoinheanne (14M dredgeing Depth), tug Napier and 2 X 550M³ split hopper barges. The existing harbour CD level was reduced by 4m from -5CD to -9CD. The challenging aspect of the project was that, 70% of the material removed was made up of boulder clay with the remaining 30% made up of soft to silt material.

All dredged material was disposed of via tug and split hoppers at the designated disposal site.

On completion of the harbour project, FMD relocated the spud-leg Dredger Aoibheanne to Campbeltown Marina for the removal of 10,000M³ of soft material. Due to the considerably reduced working space in the marine FMD deployed a 150M³ self-propelled hopper barge to load into and dispose of the marine material. The marina material was made up of stable, soft material which required accurate and controlled dredging methods to achieve and maintain the design depth throughout the marina in a short time frame.

NOTE: Both projects were planned and coordinated alongside BAM Nuttals management and the harbour master to ensure the harbour and marina remained open for business through the dredging works.

PRINCIPAL SCOPE OF WORKS
Dredging & Disposal of 32,000M³ of material at -9CD 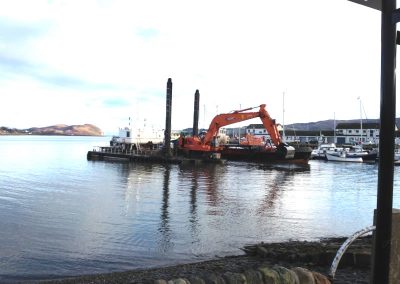 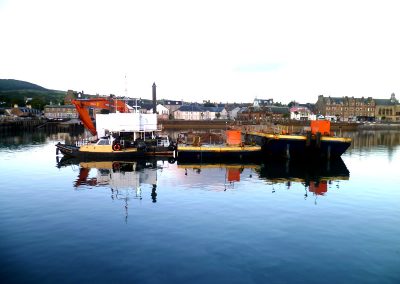 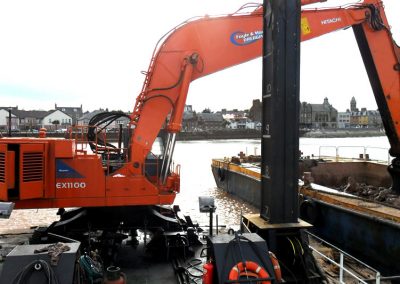