Challenge presented on this project

The project works were carried out with the Spud leg dredger Aoibheann, Tug Tregeagle along with 2No 330M³ split hopper barges. All marine works had to be conducted without causing any disturbance to the live ferry berth which was at close proximity to the dredging area.

To reduce the volume of material going to sea while ensuring the required dredge depth was achieved, the dredge design consisted of a serious of details slips and falls. This detailed design was only achievable with an accurate dig system in Prolec Pcx which proved it’s accuracy on the final survey.

The dredged material was loaded into 2No 335M³ split hopper barges and towed by the Tug Tregeagle to the designated disposal location which was 16NM from the dredge site.

On completion of the dredge design, Foyle & Marine began preparing an area of the 1300M² directly beneath / behind the new terminals vessel prop wash area. The area was prepared and 1300M² of geotextile was laid on the pre-dredged area via a geotextile lifting frame and placed accurately with the backhoe dredger under the guidance of the Prolec Pcx.

Two layers of scour protection were then placed on top of the geotextile to provide protection and erosion from both European Highlander & Causway prop wash. A layer of 20Kg-200Kg rock was placed directly on the geotextile followed by a second layer of 1 tonne rocks.

The works were planned around the ferry movements and there was no disturbance caused to the ferry timetable throughout the project. 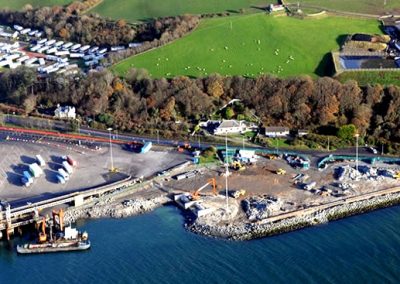